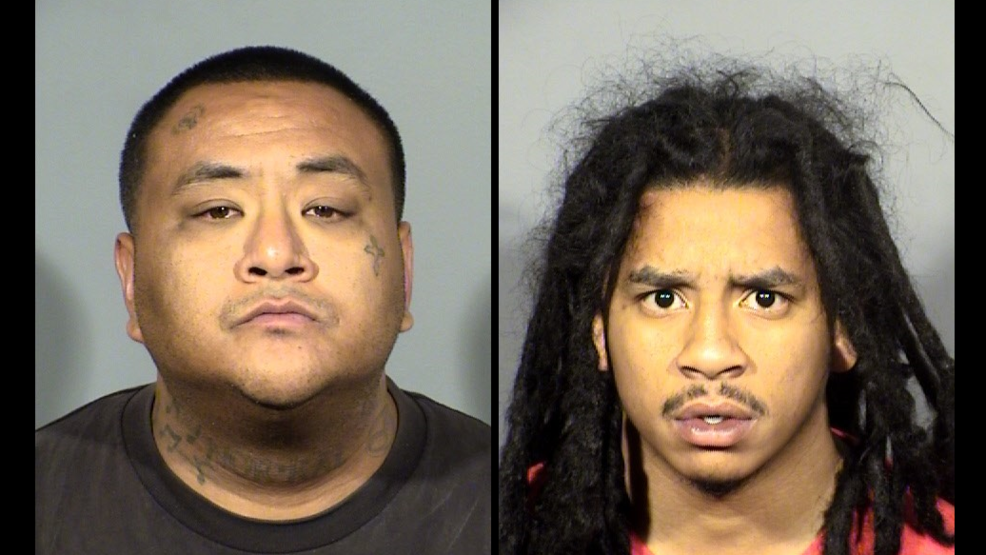 Samuel Kealoha Keli Roaque and Immanuel Tre Collins have been identified as two of the suspects in a violent home invasion of an elderly couple. (LVMPD/KSNV)

TUESDAY 11:40 A.M. UPDATE - Two of the three suspects have been arrested in connection with this case. They have been identified as Immanuel Tre Collins and Samuel Kealoha Keli Roaque.

ORIGINAL STORY - Home invaders attacked a 97-year-old man inside his house along with a couple in their 70s. The Las Vegas Metropolitan Police Department says three armed men broke into the house and fled in the family's Tesla.

In an update on Saturday, police obtained photos of the three male suspects, as well as women suspected in the illegal usage of the victim's credit cards.

Steve Schifer witnessed the home invaders flee from the scene.

"I started to hear some arguing. Mostly a woman's voice screaming and yelling," said Schifer.

Schifer tells us he still can't get the screams he heard coming from the central valley home out of his head. He lives right across the street. Investigators say a busted side window next to the front door shows where the invaders gained entry into the house.

"The sound of the screams, I could still hear it. It just -- it was shivering. It was like oh my gosh there is something going on," said Schifer.

LVMPD says just after 1 a.m. Wednesday, three men armed with knives entered the home on Holbrook Drive, a neighborhood near Flamingo and Lindell. Investigators say a couple in their 70s and a 97-year-old man were inside when the home invaders confronted them. Police say the thieves ended up stealing property and left with the couple's royal blue Tesla Model S car. Schifer witnessed the violent suspects get away.

Police say as the thieves sped off in the Tesla, the homeowner ended up getting dragged across the driveway. The victim and his wife needed to go to the hospital after suffering injuries from the home invaders.

The unoccupied vehicle was later found by the North Las Vegas Police Department near the 2200 block of Travis Street.

Family members, off camera, say their 97-year-old grandfather was roughed up. Police believe this home invasion may have been random.

"I’ve been here for over 30 years. This is about the first time something like this has happened. It's usually a very quiet neighborhood," said neighbor Horacio Lopez.

Lopez says he will now live in fear. Police have not released a description of the three home invaders.

"That scares the neighborhood, you have to be more careful. May formulate a neighborhood watch program," said Lopez.

Anyone with information is urged to contact the LVMPD Spring Valley Area Command Patrol Investigations Section at 702-828-2640 or Crime Stoppers at 702-385-5555.