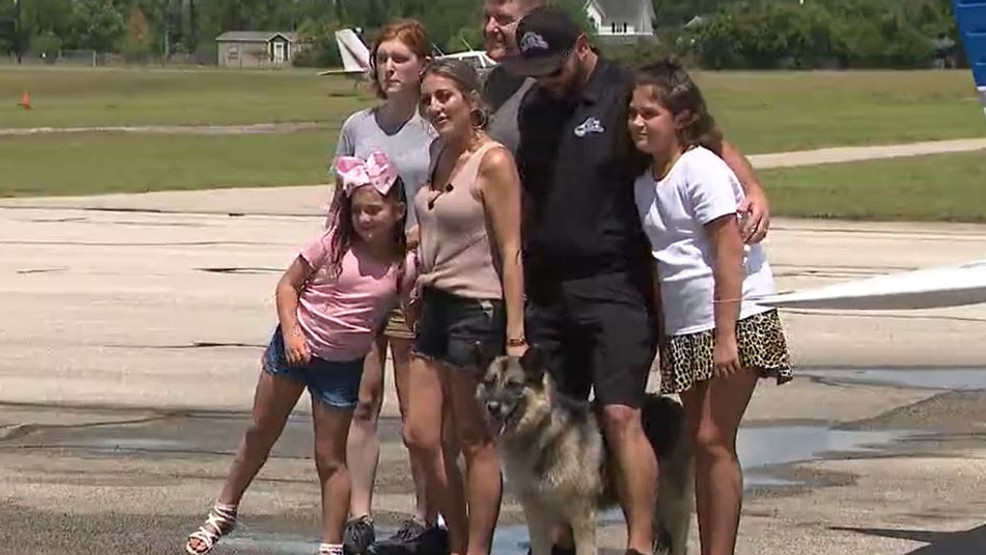 Sheeba with the Malmstrom family after plane lands in Baytown (KFDM)

A dog that was stolen nearly five years ago near Houston and found last week in the Texas panhandle is finally back home with her family.

A plane carrying Sheba landed Sunday afternoon at the airport in Baytown, Texas where Stephanie Malmstrom and her family were anxiously waiting.

The German Shepard was stolen from the family's home in January 2018.

They searched and searched, but never found her.

I remember just searching every day, every night. It was really sad when we had to keep searching for her but we never found her," said Anniston Malmstrom who was just 3-years-old at the time.

Last Monday, Sheba surfaced more than 600 miles away in Borger.

Animal Control officer Jared Harper found her roaming the streets on Aug. 1. But until he ran her microchip and contacted the Malmstroms, he had no idea she had been missing for so long.

The city teamed up with Friends of Texas Panhandle Shelter Pets and Pilots N Paws to fly Sheba home.

Malmstrom and her daughters were absolutely overwhelmed when they were able to see and touch Sheba for the first time since 2018.

"Their emotions are all over the place. They're so excited, and I don't think my 8-year-old understands that you can cry when you're happy," said Malmstrom. "She's like,' why am I crying? I'm happy'. And I'm like, you're crying happy tears. You get emotional. It's okay to cry because they're happy tears."

Stephanie said it took just a few minutes for Sheba to recognize her and the girls.

As you might imagine, the family immediately started making up for lost time.

They spent the rest of the day grilling, swimming in the pool and playing with Sheba.

For the first time in nearly five years, the Malmstroms and Sheba all spent the night under the same roof.