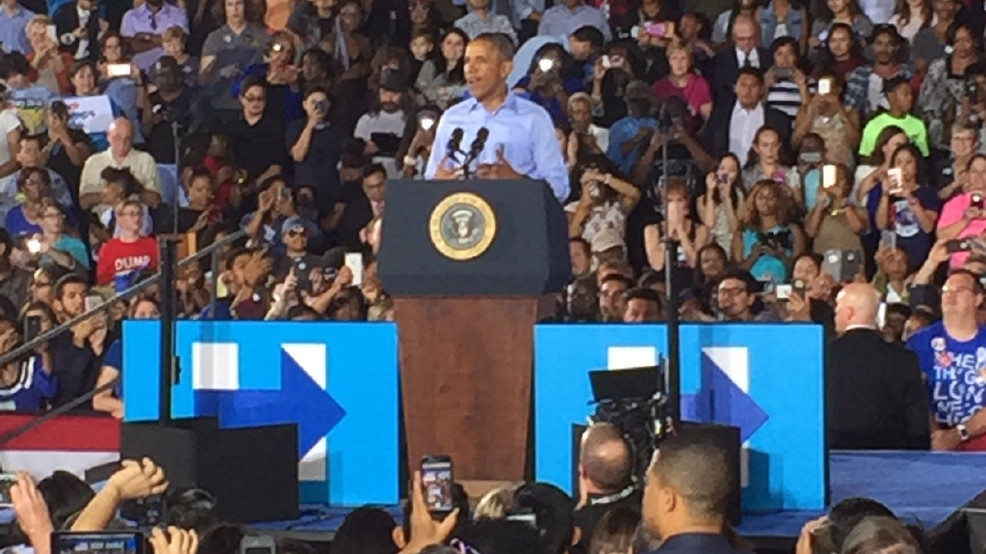 So, before a packed gymnasium at Cheyenne High School, the President made sure there was no doubt.

“On issue after issue, Catherine Cortez Masto is going to be on your side, working for you,” President Obama told the audience.

Cortez Masto is locked in a tight race with Republican Congressman Joe Heck, with polling showing the outcome could go either way. The race pits the Democrat, Nevada’s former Attorney General, against a popular three-term Republican incumbent, who’s leaving the House for a shot at the seat Harry Reid is giving up.

Two weeks ago, in the wake of the now-infamous video which caught Trump making vulgar comments about women, Heck dumped Trump, saying the Republican nominee’s comments were absolutely unacceptable.

“What took you so long,” Obama asked today. “What the heck?”

Obama hammered home the point -- it's too late.

“Why didn’t you walk away months ago when you heard your nominee for President, a guy you were hoping would become President, call women pigs, dogs, slobs, grade them not on their character or their intelligence, but on a scale of one-to-10,” Obama said. “You don’t have to be a Democrat to think there’s a problem with that. You just have to be a decent human being.”

The Heck campaign issued its own “prebuttal” Sunday afternoon.

“Democrat elites are so worried after Catherine Cortez Masto’s lackluster and underwhelming debate performance that they asked the President to campaign on her behalf,” said campaign spokesperson Brian Baluta. “Cortez Masto has repeatedly displayed her shallow knowledge of foreign affairs, national security, the economy, education, but has shown herself to be a capable corrupt career politician.”

Obama’s appearance in the Valley comes on the second day of early voting, which has seen record turnout, and in Clark County, which has seen Democrats outnumber Republicans.

Obama’s message today, delivered under a huge “Vote Early” sign, was simple: vote, and get everyone else you know to the polls, too.

When a young woman in the audience shouted that she had just voted for the first time, the President said he was proud of her.

“Donald Trump is already talking about how the game is rigged,” Obama told the crowd, adding, “I got to say – that means he’s losing.”

Obama said America’s election system is run by both Republicans and Democrats and in states, like Nevada, with a Republican Governor.

“There are Republicans and Democrats watching how they are counted. If this is rigged, boy, it would be a really big conspiracy,” Obama said.

The Trump campaign welcomed Obama to Las Vegas with a statement from its State Director Charles Munoz.

“Just as President Obama tried to convince Americans that, with Obamacare, ‘if you like your doctor you can keep your doctor’ when he knew it was not true, he’s now trying to convince Nevadans to trust Hillary Clinton with the presidency. Even Barack Obama’s brother, Malik, knows that Hillary would be a disaster as President,” Munoz said.

At their final debate last Wednesday at UNLV, Trump invited the President’s estranged brother as a guest.

The President minced no words about the man heading the GOP ticket.

“Competing for the job I currently hold, you’ve got a guy who proves himself unfit for this office every single day, every single way,” Obama said.